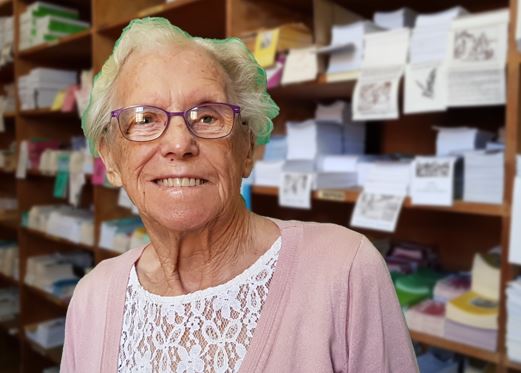 A brief history of the Evangelical Mission Press

This overview of the work at the Evangelical Mission Press (EMP) is adapted from an article written many years ago in circa. 2006, by the then Chairman of Precious Seed, Roy Hill, from Bristol, England.

EMP is located in Bellville, a town on the outskirts of Cape Town, South Africa.

In 1922 Mr. W. J. Coleridge was commended by the assembly in Teignmouth, Devon, to the work of the Lord in the Transvaal area of South Africa. He spent some years there working in the mining communities and learning both Zulu and Sesotho in order to be able to communicate effectively. He became exercised about the need for literature and set up a small printing press in his garage in Johannesburg in 1931. Initially it was known as The Rand Press. Some of the tracts he wrote then are still printed and distributed today. In the early years of the Press, he was assisted by Mr. and Mrs. Proudfoot, originally from England but residing in Johannesburg. In 1935 brother Coleridge and his wife moved south to Cape Town and once again he set up the printing operation in his garage in the Mowbray area. Over the years many others joined in helping the work including from 1955 Nellie and Lily Webb from Bristol, UK, and Alfred and Isabel Rich.

In 1956, Kenneth and Charlotte Elliott were commended from assemblies in Belfast, N. Ireland, to help in the printing work and they arrived in the Cape in January 1957 and commenced work at EMP.
(They were voluntary fulltime workers with no church or institution providing a monthly income, neither guarantee of regular gifts, or any such funding. It was their humble faith in a faithful God. They committed their needs to the Lord on a daily basis, and He provided for them.  His provision was often just in time to meet the needs of a family that grew to nine children, as well as the ever-increasing costs of running a printing press that distributed free literature across Africa in about 60 languages. )

God blessed the work and it grew so that the garage was no longer suitable and new premises had to be found. Three plots of land in Northumberland Street, Bellville, became available and through the generosity of Mr. Dedman from Houston, Texas, USA, they were purchased in 1960 and a building erected. Into this came more modern printing and finishing machinery and the work continued to grow. Other helpers came. Some stayed for many years and others for shorter periods and all contributed their skills and effort to the work. They included, Mr. and Mrs. Jack Scott from England, Kath Ripper from Tasmania (she was there for 29 years!), and Mr. and Mrs. Alan Chambers from Sydney, Australia. During the 1970s Mr. and Mrs. Harry Faulkner also helped in the work. The Bookshop work was started by sister Charlotte and named ‘Christian Publications’ with the aim of making good quality Bibles, study helps and useful books available at affordable prices.

In 1976 when the new premises became too small, a further building was erected on the site. This was financed by brother Henry Shelton of Johannesburg. He sold his business interests and used the money for the Lord. A few months later the Lord took him home. Mr. Coleridge went to be with the Lord in 1963 after being ill since 1959. Brother Coleridge lived to see the first of the new buildings in 1960 and from then on EMP was driven on by Ken Elliott. Kenneth Elliott was called home in 1999 after 42 years faithful service.

His wife Charlotte continued the work, and more help arrived in October 2000 when Robin and Mary Rossouw, who joined the work being commended from Ebenezer Assembly in Worcester. They were followed in 2001 by Rodney and Joy Brown commended from Larne, N. Ireland, and in 2003 Robert and Ann Smith arrived, commended by the assemblies at Broomhedge, N. Ireland and Kilwinning, Scotland. Over the seventy-five years of the history of EMP they have printed about 175,000,000 tracts and about 30,000,000 other pieces of literature including calendars, booklets and Emmaus courses. These are sent in response to requests from mostly Southern Africa, but include other countries as well. The work and the workers are supported by the Lord through the generosity of His people and trusting Him alone, and EMP looks forward to many more years, if the Lord will, of continuing growth and being used by the Lord in bringing the Light to Africa, its nations and peoples.

There were many fulltime workers like Kath Ripper, Mike Howell, Senga Hallett (nee Simmons), Hillary Goodall, Chris Alenskas, Walter Boyd, David & Helen McKillen, and others. There have been many tireless volunteers to assist with printing, packaging, postage, and customer service over the years who have enabled the work to continue to this day, not to mention committed staff.

All the full-time workers noted above retired or were called into different ministries locally and internationally, so Charlotte continued to run the Press day-by-day right into her nineties. This continued until the Covid-19 lockdowns forced temporary closure in 2020. During this time Charlotte fell and broke her hip, and steadily declined until going home to be with the Lord on the 29th March 2021.

Her youngest son, David Elliott, got involved with the Mission Committee in 2019 to help oversee the transition to the next full-time worker, and he was joined by his wife Camilla-Anne, and sister Grace, who had been assisting Charlotte with the banking, Post Office etc. However, after a number of years, no fulltime worker appeared, and Charlotte noted that she was sure the Lord had asked her to keep going until He closed the work. David was burdened to continue the work, and invited two local brethren  (referred by Charlotte) onto the Committee during transition period. They were a great asset during this difficult time, and after Charlotte’s passing they both stepped down. The Mission Committee now comprises the former three, who will continue to look to the Lord for guidance for the future.